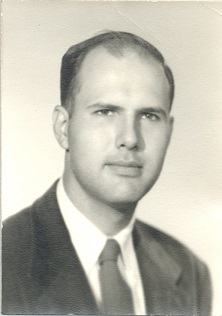 Joseph Torbitt Mengel, Jr. was born in Knoxville, Tennessee on July 29, 1931 to Joseph Torbitt Mengel, Sr. and Susan S. Mengel. Mengel, Sr. had returned to the family logging business following his time overseas during WWI, and by the time of Mengel, Jr.’s birth he owned the Foreign and Domestic Veneer Company, which had logging interests in Tennessee as well as in the Yucatan and parts of Africa. As a teenager Mengel, Jr. attended the Asheville School for Boys, a boarding school in Asheville, North Carolina, and worked for his father during the summers.

Mengel attended the University of Tennessee and graduated in 1954 with a major in Geology and a minor in Archaeology. He went on to earn a Master’s of Science in Geology from the University of Wisconsin-Madison in 1956. He then left academia for several years to work as a Geologist for Mobil Producing Company in Billings, Montana. In 1959 he returned to UW-Madison and completed his Ph.D. in Geology in 1962.

Mengel, Jr.’s teaching career began in 1962, when he became an instructor of Geology at UW-Superior (then Superior State College). He became a full tenured professor in 1966, and took on the additional role of Faculty Athletic Representative in 1963. Mengel continued to teach at UW-Superior until 1979. In 1967 he was a Visiting Reader at King’s College, University of London, and in 1978 he became the Chair of UW-Superior’s Department of Geology. During his time at UW-S, he also worked on the Douglas County Red Clay Project, a multi-year project that explored slope stability considerations in the Douglas County red clay area of Wisconsin, an area that includes Superior. This project was completed in 1976.

In 1979 Mengel resigned from the University to pursue a career in consulting. Over the next twenty years he worked as a geological consultant with various firms, as well as independently. He continued to be involved in geological, personal, and community projects until his death in 2011 at the age of 80.