Online finding aid for the Fraser Shipyard Collection at the UW-Superior Archives.

Fraser Shipyards began as the American Steel Barge Company in 1889, when Alexander McDougall chose to move his whaleback shipbuilding enterprise from Duluth to Howard’s Pocket in Superior. McDougall formed the company with the backing of industrialists such as Colgate Hoyt, Charles Westmore and Samuel Mather. The Superior Shipbuilding Company took over the property in 1899, and remained there until 1936. In 1945 the Shipyard 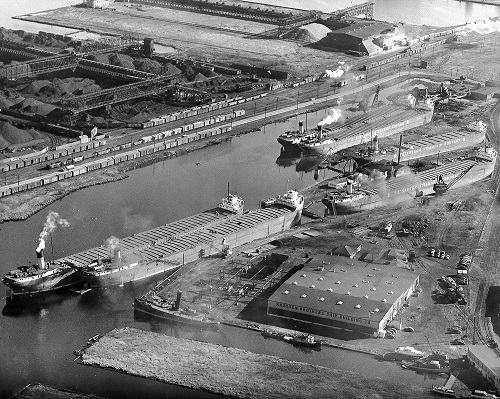 was sold to the Knudsen Brothers, Eigil and Henry. From 1945-55 the company operated under the name of The Knudsen Brothers Ship Building & Dry Dock Company. In 1955, the name changed to The Knudsen Shipbuilding & Dry Dock Company. In 1958, the shipyard became The Fraser-Nelson Shipbuilding & Dry Dock Company under the leadership of Byron Nelson and Robert M. Fraser. The end of 1964 brought Nelson’s retirement and Fraser assumed full ownership of the company, and the name changed for the last time to Fraser Shipyards, Inc. Also in 1964, Trevor White joined the company as director of engineering. The 1960s brought much business to the shipyard due to the projects involving the conversions of steam power to diesel power and bulk-carriers or flatbacks to self-unloaders. In the mid-1960s, the shipyard did its first vessel lengthening project.  In 1968, it was announced that Fraser Shipyards, Inc. was to be sold to the LST Corporation led by Robert H. Lucas. Lucas assumed the role of president at the shipyard. He named Robert W. Fraser (son of Robert M. Fraser) vice president and assistant general superintendent. Ted Brush was named vice president and general superintendent of production. In April of 1969, Lucas announced his resignation as president and director of LST Corporation and Fraser Shipyards, Inc. In May of 1969, Ted Brush became the president. Robert W. Fraser remained vice president, but was promoted to general superintendent of the shipyard. The 1970s brought conversion jobs involving coal to oil burning systems and the installation of bubbler systems. In 1977, Robert W. Fraser announced the sale of Fraser Shipyards to Reuben Johnson & Son under the leadership of company president Troy Johnson. Ownership and management changed, but the name of the company did not.  Johnson appointed Phillip A. Milroy the president and chief executive officer of the shipyard. Milroy retired in 1989, and Trevor White became vice president and general manager of the company. Fraser continued major projects including the conversion of the Leon Fraser to a cement bulk carrier, which involved removing a 120-foot section from the hull, making Fraser the first shipyard on the Great Lakes to accomplish this. In late June 1990, the shipyard celebrated its 100th anniversary. In 2009, the shipyard was able to upgrade its basic facilities consisting of a joiner shop, main machining and fabricating ship, two graving docks, and layup and fit-out berths. This was possible because Fraser received funding from the Safe Harbor Assistance Program amounting to $3.7 million dollars. The funding was used to expand machining and fabrication operations, as well as add a high definition plasma cutting table to the shipyard. In 2009, Fraser purchased Lake Assault Boats which produces aluminum boats. The Safe Harbor Association Program money was also used in 2011-2012 to renovate the exterior layup berths. In 2010, the U.S. Department of Transportation granted Fraser $2 million of federal funding. This grant was used for the installment of high efficiency electrical transformers. Fraser Shipyards is still operating in Superior, Wisconsin under the ownership of Reuben Johnson & Son.