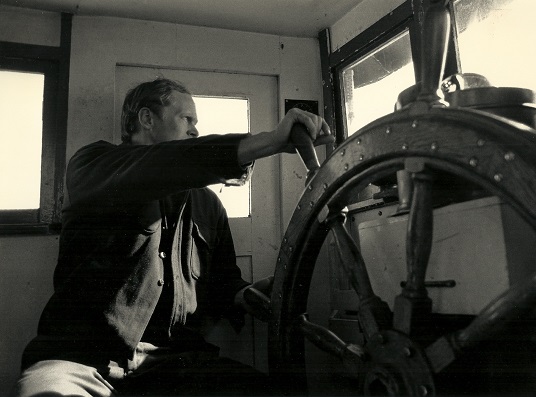 Dan Rau at the wheel of the Hiawatha

Dan Rau became captain of the L.L. SMITH JR, the UW-S Lake Superior Research Institute’s research vessel, in 1990. During his time as captain, he held other positions at the University, including Environmental Toxicology Research Tech and Senior Lecturer in Math and Astronomy. He has also worked as a Fisheries Research Vessel Captain for the Wisconsin Department of Natural Resources, and has many years’ experience as a self-employed commercial fisherman.  Rau holds a MEd from the University of Minnesota Duluth, where he completed a thesis developing a navigation course for high school math and science teachers.

The L.L. SMITH, JR is a 58-foot all-steel tug powered by a five-cylinder direct-drive Kahlenberg diesel engine. She was built by Knudsen Brothers Shipbuilding and Drydock Company (today Fraser Shipyards) in 1950 as the H.R. KNUDSEN, and purchased in 1979 by UW-Superior as part of an initiative to increase research programs at UW-S. She was refitted as a research vessel and renamed in honor of University of Minnesota fishery biology professor Dr. Lloyd L. Smith. One of the SMITH’s first projects was a shipwreck study of the Isle Royale area, commissioned by the Department of the Interior. Until 1986, the SMITH operated as part of the UW-S Center for Lake Superior Environmental Studies (CLSES), until CLSES’s Wisconsin Point field center was closed due to lack of funding. The SMITH continued to be used by University researchers and students into the next year, but then ceased operations.

In 1990, the UW-S Lake Superior Center put the SMITH back on the Lake, with Dan Rau as captain. Since that time, she has been utilized by a variety of groups to conduct research on Lake Superior. In addition to UW-S students and researchers, elementary and high school groups from all over Wisconsin and Minnesota visit Superior for class trips aboard the SMITH. Today, the SMITH is operated by the UW-S Lake Superior Research Institute. Capable of accommodating 25 passengers, she is equipped with an array of research equipment, including optical and video microscopes, a hydraulic sediment dredge and fish trawl, and deepwater samplers for water and sediment collection.